Season 5 of The Last Kingdom was announced by Netflix on July 7, 2020.[1] The season premiered on March 9, 2022 and consisted of 10 episodes.[2] It roughly adapted the plots of "Warriors of the Storm" and "The Flame Bearer", the ninth and tenth novels in Bernard Cornwell's The Saxon Stories. This is the final season.[3] However, it was announced that a follow-up movie, Seven Kings Must Die, will be released to conclude the series.[4]

A betrayal at Eoferwic sends Sigtryggr in search of aid, while Uhtred begs Æthelflæd for military support she cannot give. Edward meets a new ally.

In the aftermath of the tragic battle for Eoferwic, Sigtryggr is forced to make a painful choice. Edward learns of Æthelhelm's intrigues in Mercia.

Rivals secretly advance competing successors upon the death of a Mercian ruler. Brida finds solace in the faith of her prisoner, Father Pyrlig.

Æthelhelm's subterfuge successfully foments war tensions between Edward and Sigtryggr, but his thugs make a crucial mistake in attacking a pilgrimage.

The forces of Edward and Sigtryggr march toward battle as Uhtred races to reveal the truth of Æthelhelm's scheming and avert a ruinous war.

Edward offers a role to Stiorra that would restore her to power. Æthelhelm meets with a Saxon enemy. Uhtred has a long-overdue reckoning with Brida.

Upon learning of Æthelhelm's location, Uhtred proposes an audacious attack to rescue Ælfwynn and restore his birthright -- but Edward is cautious.

Armies converge in an epic, final showdown that determines the fate of a king's dream for England -- and Uhtred's hope of securing his family's future. 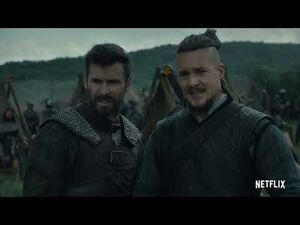