Season 4 of The Last Kingdom was announced by Netflix on December 21, 2018.[1] The season premiered on April 26, 2020 and consisted of ten episodes. Production began in April 2019[2] and ended in October 2019[3]. It roughly adapted the plots of the "The Pagan Lord" and "The Empty Throne", the seventh and eighth novels in Bernard Cornwell's The Saxon Stories.

Uhtred receives news that Bebbanburg's defences have been weakened by Scottish attacks and plans to seize his birthright, but Edward refuses to help.

As Uhtred and his men draw closer to Bebbanburg, prodigal son Wihtgar returns with some tricks up his sleeve. News of Cnut's treachery reaches Wessex.

Uhtred suffers an unbearable loss in his attack on Bebbanburg but takes some valuable captives during his retreat south. Æthelflæd prepares for war.

Hoping to be joined by Edward's troops, Æthelflæd and Uhtred ally with the Welsh to face Cnut's thousand-warrior army at the Battle of Tettenhall.

A repentant Æthelred lingers near death while his ealdormen vie for control of Mercia and Edward uses his niece Ælfwynn as a bargaining chip.

Eardwulf and his men pursue Uhtred's party as it flees through a countryside ravaged by disease. Tensions rise between Edward and the Mercians.

Ælfwynn suffers from the sickness sweeping the land. Edward proposes an unexpected path forward for Mercia. Brida is freed by Cnut's kinsman.

Uhtred reluctantly prepares to take power in Mercia but secretly formulates an alternate plan. Brida joins the Danes in attacking the Welsh. 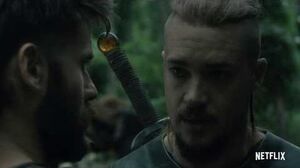