The Last Kingdom Wiki
Register
Don't have an account?
Sign In
Advertisement
in: Male Characters, Alive in the Novel Series, Deceased in the Television Series,
and 18 more

"War of the Wolf"

Stabbed in the side by Bresal.

Osferth: "I would like you all to surrender. Or I will smite you."
Danes: "What did he say? Smite? What is "smite"?"
Osferth: "It's a word, isn't it? A word from the Holy Book. It means slay or kill. I will kill you. Smite."
Danes: "You will smite all of us?"
Osferth: "Yeah, most. Some of you might run away, hopefully. I've got... I've got a sword. A very sharp sword. But I'd prefer it if you surrendered." [src]

Osferth is a main character in both The Saxon Stories novel series, and The Last Kingdom television series.

He was the result of a union between Alfred and a serving girl named Eadgyth. He was an embarrassment to the deeply religious Alfred. He was enrolled as a novice monk.

In "Sword Song", Uhtred saw Osferth and recognised him. After Osferth said he did not want to be in the Church, Uhtred took him into his service. When Father Beocca objected, Uhtred pointed out that Osferth would probably die the first time he fought in a shield wall, thereby relieving Alfred of his embarrassment, Beocca saw Uhtred's point. During the battle for London, Osferth jumped from a wall into the midst of the enemy and seriously wounded Sigefrid, a Danish warlord, crippling him. At Alfred's demand, Uhtred sent Osferth back to Wintancester with Pyrlig but Alfred soon allowed Osferth to return. Osferth killed Sigefrid in a second battle and Uhtred gave him Sigefrid's sword.

In "The Burning Land", Osferth developed into a competent warrior and led a portion of Uhtred's troops.

In the first novel, "The Last Kingdom", Osferth is mentioned the first time when Uhtred spies for the Danes and eavesdrops on a conversation between Alfred and Beocca in the Westsaxon camp near Snotengaham. It's possibly late summer in the year 868.

This list shows the battles Osferth has participated in:

"Finan: He just loves burning things.
Osferth: He'd love hell."
—About Uhtred, after he set a roof on fire. 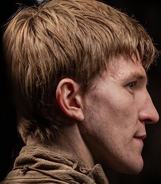